15 Traditional Iranian Foods That Will Blow Your Mind

Previous Next
15 Traditional Iranian Foods That Will Blow Your Mind

All the best traditional Iranian food in one place – the street food, the fancy food, the drinks and my personal favourite: the sweets!

We love food and we love Iran!

Combine the two and you get this list of all the best traditional Iranian food and drinks for budget backpackers. We’ve included a bit of everything: food you can buy in the streets, food you buy in restaurants, some sweets (of course!) and a few typical Iranian drinks.

I’m writing this as I’m finishing our last piece of halva and reminiscing about all the delicious new things we got to try. In Iran, the bazaars are a wonderland of smells, tastes and colours. The best part is that, unlike in Morocco, you don’t need to blow your budget to have good food in Iran.

We did have a couple of food fails, though.

The worst one was probably the sheep stomach Liam had in Kashan. Ironically, we actually only entered the restaurant to see where this rotten smell was coming from, but as a true Iranian, the chef immediately offered us a free sample. And well… You can’t really say no, can you? 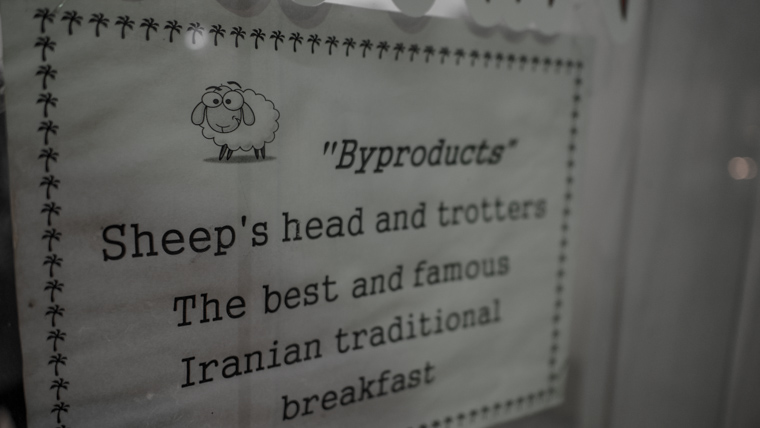 Ash is the number one traditional Iranian food for backpackers.

It’s a tasty, thick spinach stew without meat that is served with sour cream, vinegar and sometimes a paprika-like spice. Most places have two versions, one normal ash and one with noodles which is then called ash reshteh (funny enough, reshteh means noodles).

The price averages €0.50 and one serving keeps you full for hours – what more do you need? 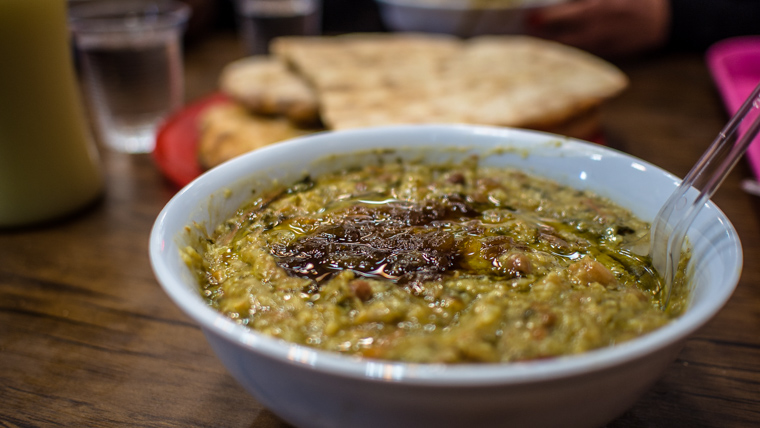 Forget tiny samosa appetizers – in Iran, the samosas are bigger than your hand, surprisingly delicious and make for a great snack in between meals. They come with a couple of different fillings, including spicy potato. 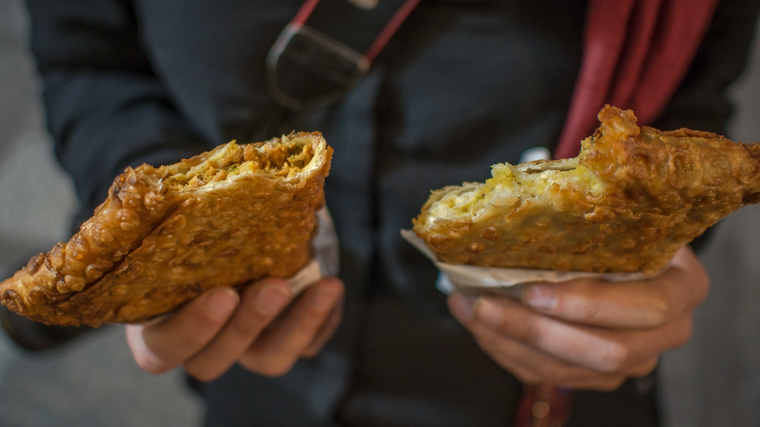 Iranian kebab is a little different to what you’re probably used to. The bread comes in a bread basket with the meat on top and a cut-up raw onion and perhaps some basil on the side. The lack of sauces and veggies is made up for by the meat choice, though: chicken, lamb, brain (!), liver, mince, you name it. 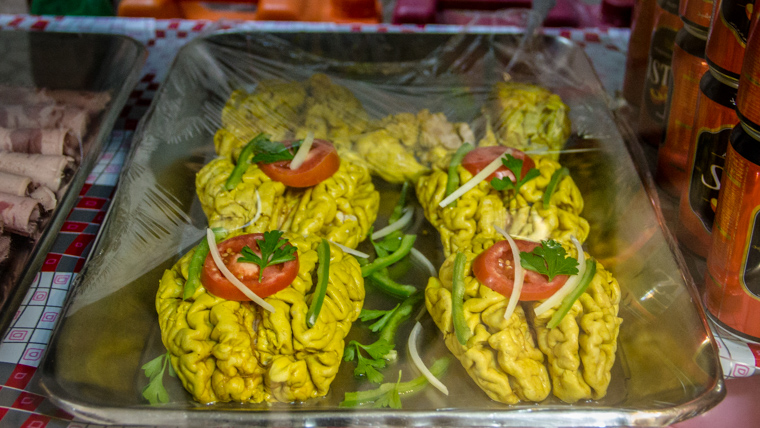 Zereshk polow literally means barberry (similar to cranberries but more sour) rice and tah-dig is a crispy “cake” of burnt saffron rice scraped off the bottom of the pot. To go with this rice feast you get a side of chicken. That’s right – the real star here is the zereshk polow which is actually a typical wedding dish. 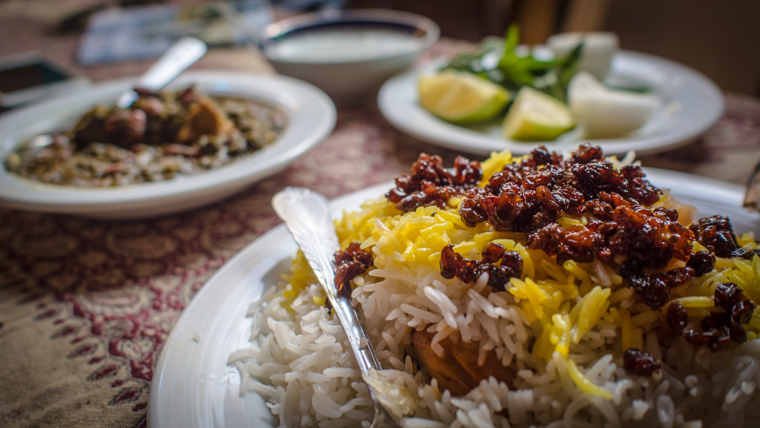 Dizi reminded us of a nice Hungarian goulash, except there’s a little more work to it. The main ingredients in this soup are lamb, chickpeas, tomatoes and potatoes, and it’s brought out in a little pot. The traditional way to eat dizi is to first fish out the meat and then mash the vegetables into a paste with a big metal tool.

It tastes delicious, whether you go through that whole process or just eat it as a soup. 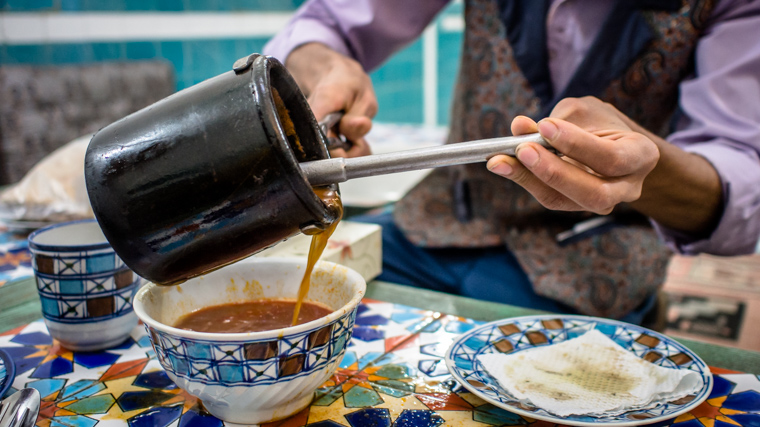 A spread made from egg-plant, onion and walnuts with a nice, refreshing mint kick at the end. It’s only served with a loaf of lavash, traditional Iranian bread, so don’t order this is if you’re really hungry, though. 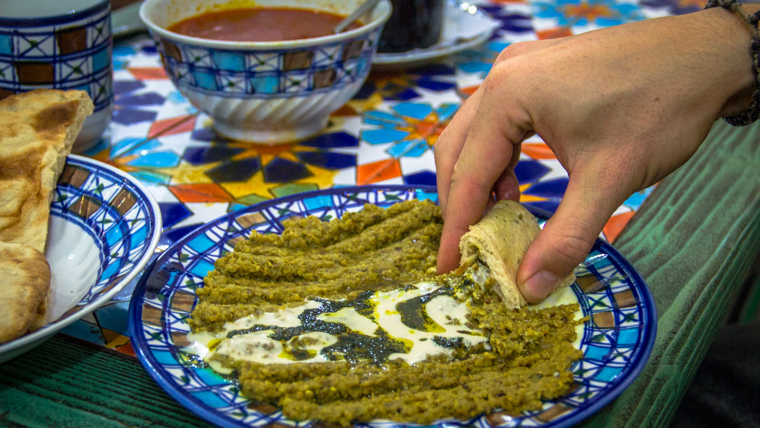 Ah fesenjan, we miss you!

This was our favourite traditional Iranian food and here’s why: it’s a sweet, heavenly walnut-pomegranate sauce that looks like Nutella and tastes unlike anything you’ve ever had before. Pour this deliciousness on a juicy chicken breast and you’ve got yourself a winner, my friend.

Apparently the secret to a great fesenjan is to use oily walnuts. One of our Iranian friends confessed that his favourite fesenjan was actually not his mom’s but rather his aunt’s, because she uses fresh walnuts from a tree in her back yard. 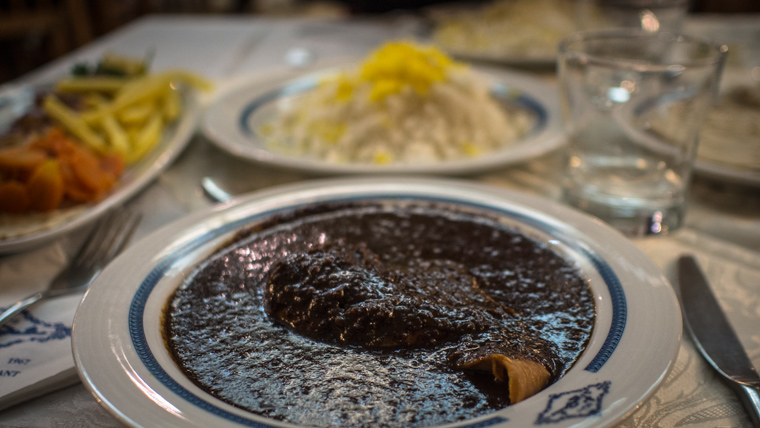 You’ll see these glorious, chewy coconut macaroons in most sweet shops in the bazaars. Grab a few and stroll through the bustling market, munching on a little piece of heaven. 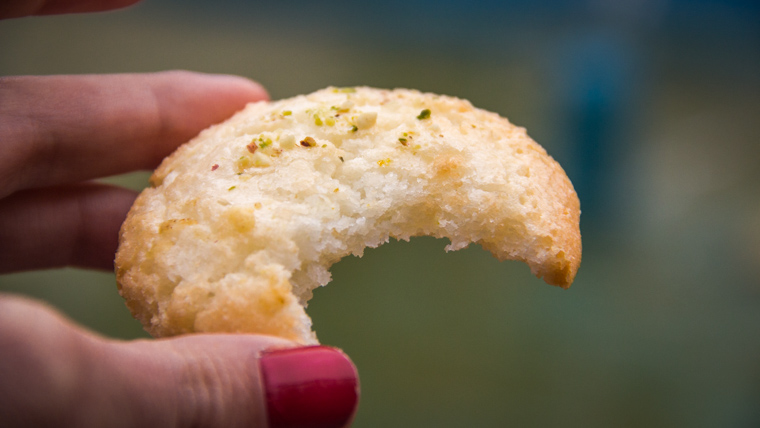 We had SO MANY of these little bad boys. They’re easy to find, quite cheap, and best of all: they’re pretty damn delicious. We ended up having a permanent cookie deposit in our day bag and I can’t say I’m ashamed to admit it. 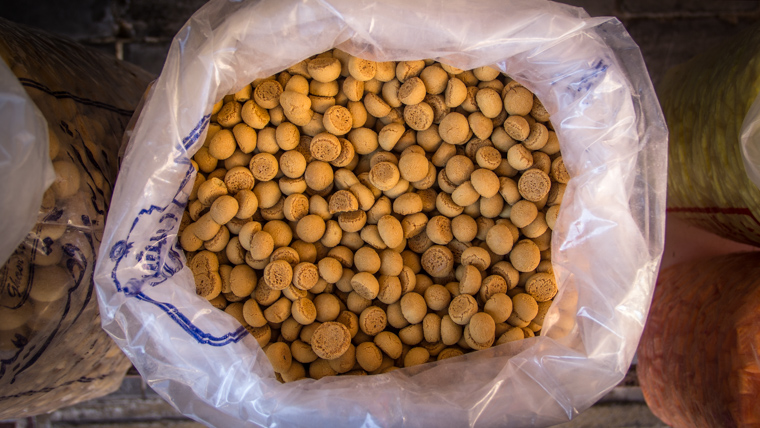 Halva is the perfect Iranian pastry – not only is it scrumptious, it’s also healthy. Similar to a Spanish turrón in consistency and taste, halva is made of sesame paste and is sweetened with honey. It’s rich in protein, iron and a few other nice things that a tired backpacker body likes.

In other words there’s no excuse for not having a daily bite of halva! 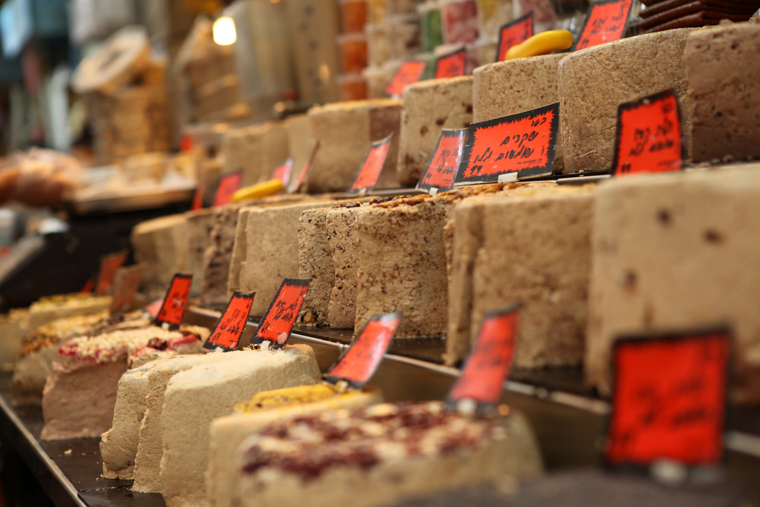 Gaz is the Iranian version of French nougat and is made from rose-water, egg whites and sap from a special plant. It’s deliciously chewy and will stick in your teeth for hours. Not-so-sexy holiday pictures coming up! 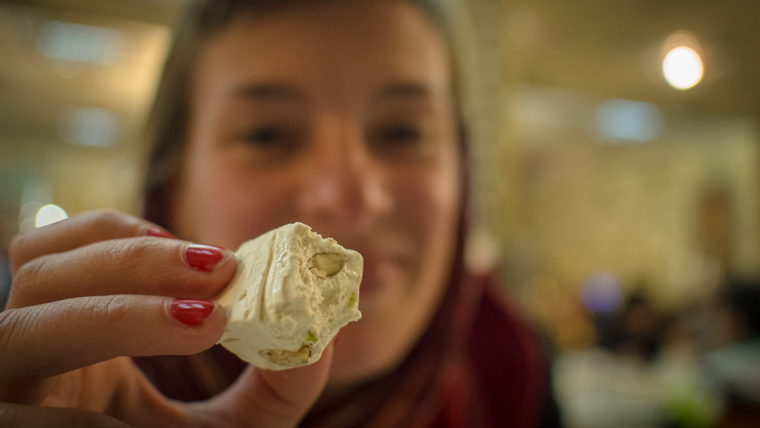 Did you even know carrot jam existed?

Well, turns out it’s a thing in Iran. We had it at breakfast in several hostels and the taste is actually not that bad. To be fair, all the jams we tried had enough sugar in them to make a 5-year-old run a marathon. 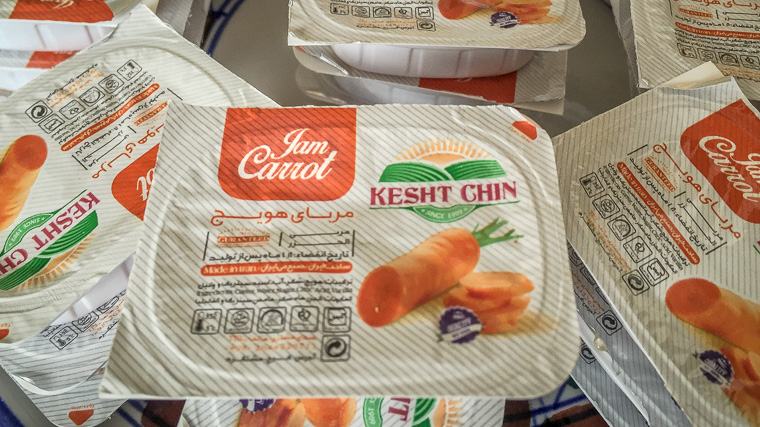 We disagree on this one. Liam thinks it’s refreshing, I think it’s way too salty. Doogh is basically yoghurt mixed with water, salt and ice cubes, but there’s something about it that’s just… Ew. Supposedly the taste gets better if you drink it regularly, and some even go as far as to call it “the Persian Coca Cola”.

I don’t know about that, but when you try it, see if you can find doogh with mint as that’s slightly nicer. 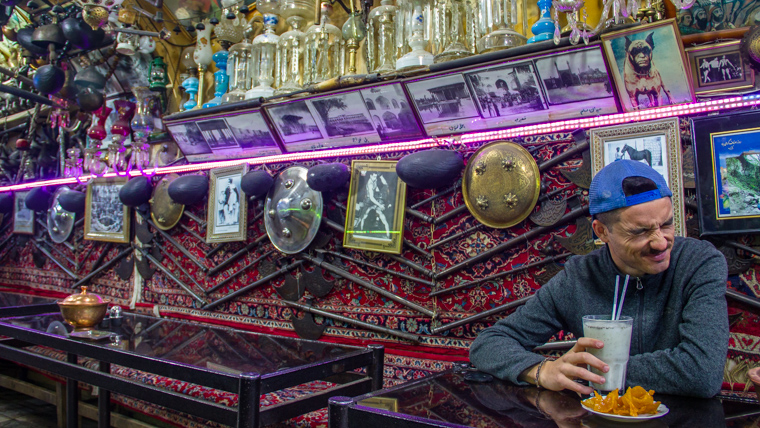 Just because you can’t (officially) drink alcohol in Iran doesn’t mean you can’t have a cold, refreshing beer. Non-alcoholic beer is widespread and is honestly not too shabby. You can find all sorts of flavors and brands, but we especially liked the lemon-flavored Istar beer. 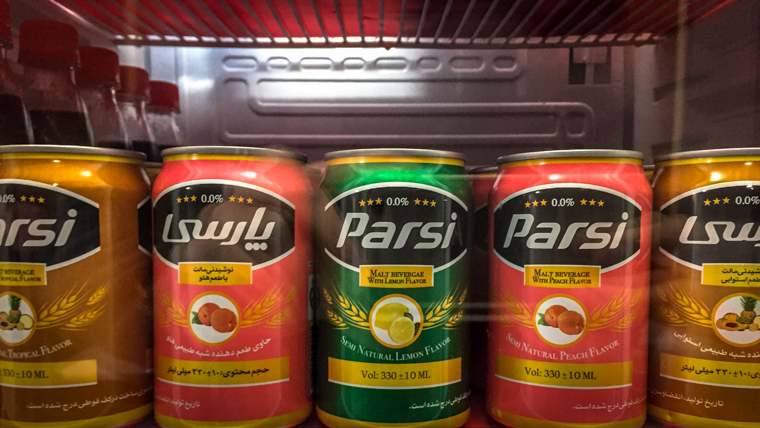 In Iran, tea ends up replacing beer as the drink that brings people together. You can easily end up having a few cups a day without even noticing, but make sure you have a dentist on call. Iranians put an alarmingly large amount of sugar in their tea.

Ready to pack your bags? Check out how to get an Iran visa on arrival

If you want to drink your tea the Iranian way, put one sugar cube in the cup and another in your mouth and slurp away. 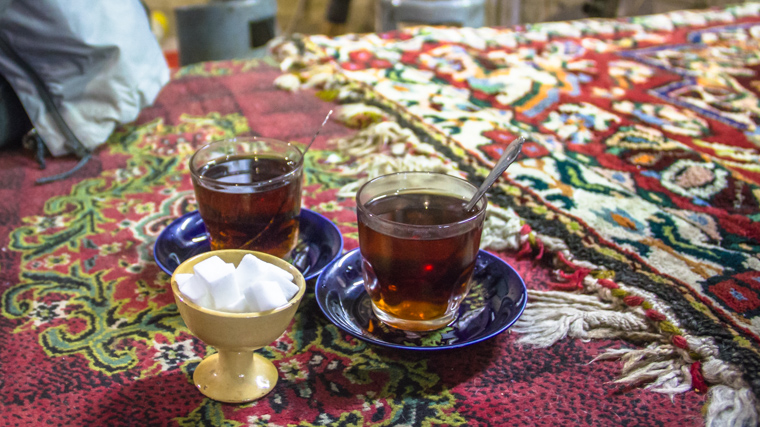