Previous Next
San Blas Islands: A Guide To Paradise

Of our 6 months backpacking from Panama to Mexico, we can hands down say that the San Blas islands are our all-time favourite spot in Central America. In fact, we both loved the San Blas so much that we chose to stay and volunteer there for a while. The islands are what tropical paradise dreams are made of, crystal-clear turquoise water, a few palm trees on tiny islands, almost untouched indigenous communities and all the Caribbean sun you could ever want. Best of all, we want to help to you experience all this loveliness with our San Blas Islands Guide! 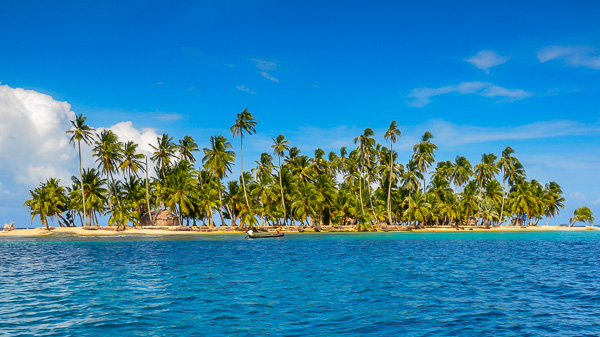 How could you beat sleeping on an island like this?

A bit more detail about the islands

The San Blas islands are a semi-autonomous Panamanian region situated in the Caribbean Sea between Colombia and Panama. That basically means they’re like the middle child of a family; they sit there doing their own thing until something really bad happens and they want help from Panama.

Their independence from Panama didn’t come easily, with one of the bloodiest moments being the 1925 Carnival when the Gunas started the actual independence war. When the festivities were underway, they sent their best-looking women to seduce the Panamanian military stationed around the islands. While the military men were distracted with the ladies (wink wink), Guna warriors attacked and literally killed them with their pants down.

One of the best things about the islands being run by the Gunas themselves is that they can make their own laws. For instance, foreigners are not allowed to buy islands nor build on the islands. The Gunas actually only inhabit around 50 of the archipelagos 365-ish islands, meaning that the only visitor on the vast majority is the occasional starfish or lobster. 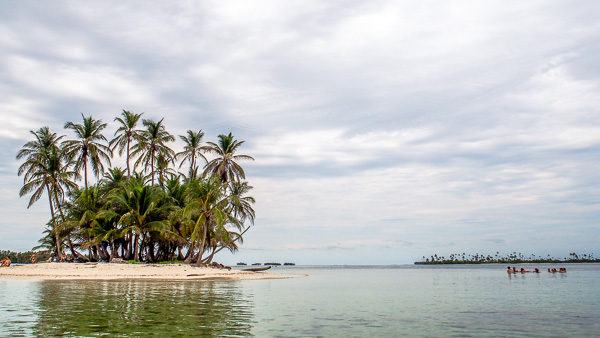 The population size on the inhabited islands ranges from actual communities with a couple thousand members to just a handful people living in huts made out of palm tree branches. Here, everybody sleeps in hammocks which is much more fun and practical than beds since the floor is, well, sand.

Starting to realise why we think it’s a great place to string up your hammock and forget about the rest of the world?

The Gunas are a green community with all their power coming from solar panels. They were installed by an American NGO in 2010. Before this, though, it was candle light only. As candles don’t give off the greatest amount of light, the Gunas had a law that no coconuts were to be cut open after dark simply because too many Gunas were losing their fingers!

Along with the minimalist décor of the islands comes the brilliant Guna toilets. Technically speaking, though, they’re not so much toilets as they are tiny huts on stilts in the ocean. Yes, you heard me – in the San Blas, you get to do your business directly on the fish. It’s actually very relaxing (unless someone is using the toilet next door and current conditions are not in your favour). 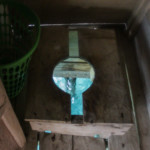 Becoming a fan is clearly easy and Liam still says he wishes the rest of the world would implement Guna toilets. One can only hope.

Related post: The best hostels to party in Central America

A Bit About The Guna People

During our time as volunteers, we really got to know the Gunas and when looking back today, their amazing culture is one of the things that stand out the most. Well, that and having lived in heaven on earth, obviously.

The locals still live like they did 100 years ago, except perhaps with a few more flat screen TVs. The men of the village still paddle out in their hand built palm tree canoes to fish and dive for lobster while the women work on their colourful beaded jewellery. As you can probably hear, this is a truly authentic community. 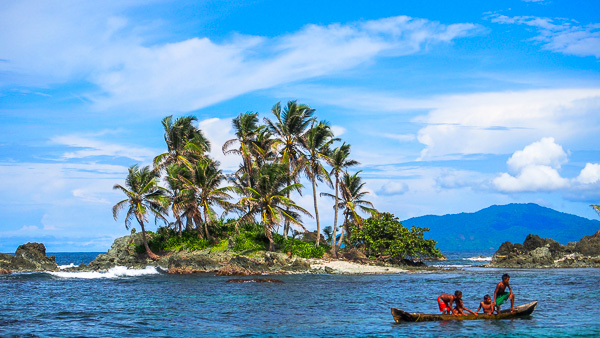 Local kids diving for their dinner in the San Blas

Just like 100 years ago, coconuts are used as currency on the islands. Even to this day, Colombian junk boats regularly sail through the islands exchanging their goods for coconuts. On their way back, they stop again at each island to collect their payment.

We once woke up only to find that almost all the men in the village had left early in the morning to go harvest some 7,000 coconuts before a boat arrived the next day.

The coconut to USD exchange rate sits around the 1 to $1 mark.

The moment you see a Guna woman for the first time, you understand why San Blas is a matriarchal society. With their short hair, legs and arms covered in colourful beads and dressed in the most beautiful fabrics, these women are simply awe-inspiring. 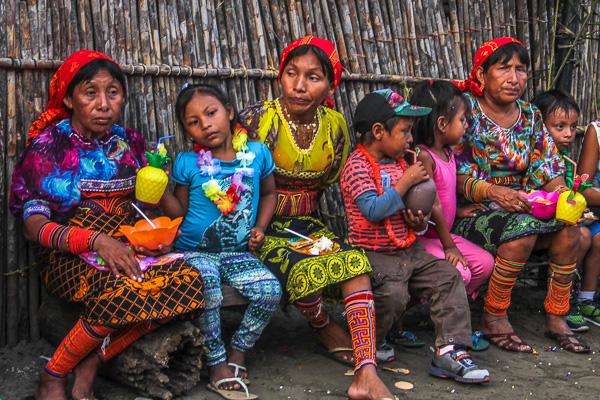 Some local Guna women at a birthday party

One of the biggest moments is when a girl has her first period (stay with me, I promise it’s worth it). The whole island partakes in a chicha fuerte party or  “period party”, as Liam likes to call it. The goal of this celebration is to get drunk on chicha (fermented sugar cane and coffee) while performing traditional dances in the girl’s honour. This is also the only time of the year that the Gunas are allowed to drink, so let’s just say they tend to get a slightly blasted.

We were actually lucky enough to get invited to a period party once and although no pictures were allowed, we will never forget that night. Imagine the normally quite reserved Guna villagers dancing, smoking, singing and drinking all night long in a huge hut. Then imagine us, trying our best to drink the vile-tasting chicha and not loose our flip-flops while being taught the dance steps. It must have looked quite funny and was without doubt one of our best memories of the islands.

The Gunas have a rich culture with some interesting superstitions. For instance, they believe that the albinos that live on the islands (the second largest population of albinos in the world) are children of the moon. Every time there’s a lunar eclipse, everybody is to stay indoors. Only albinos are allowed outside because they’re the ones that can shoot arrows at the evil dragon that’s apparently trying to eat the moon. This is very much an ongoing tradition as one of my tour groups have had to change islands because the owners had simply left to a near by community for the lunar eclipse. 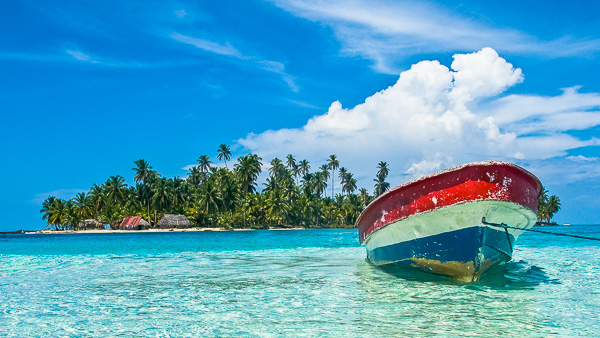 The Nity Grity of The San Blas Islands Guide

If you didn’t already know, there is no way to get from South to Central America via land. Sure, there’s a stretch of land called the Darien Gap connecting the two continents but this is not an option, no matter how adventurous you are. It’s basically a big, scary jungly full of nasty drug lords, not so fun insects, deadly mammals and lots of corrupt military. Thus, the only options are to fly ($100-300 USD) or take a boat for a similar price and see some amazing islands while you’re at it!

Here are the 4 boat options: 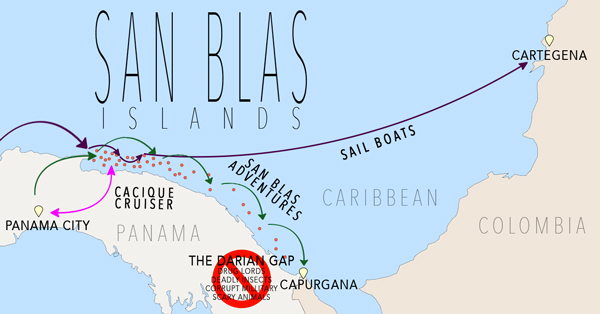 Your options for travelling through the San Blas islands

San Blas Adventures is the only company that crosses the border in speed boats. We both volunteered for them and highly recommend their tours.

The tours are 4 days/3 nights and there’s a maximum of two hours of boating per day, meaning that you have plenty of island time. The tours start from either Panama City in Panama or Capurganá in Colombia. If you’re going from Colombia, group transport can be arranged from Cartagena to Capurganá.

This is probably the best option for young travellers, both if you’re solo, friends or a couple. Group dynamic is normally excellent as there is never more than 30 people on a tour and the vast majority are backpackers in their early 20s, although there’s no age limit for drinking coco locos while floating around in a doughnut. 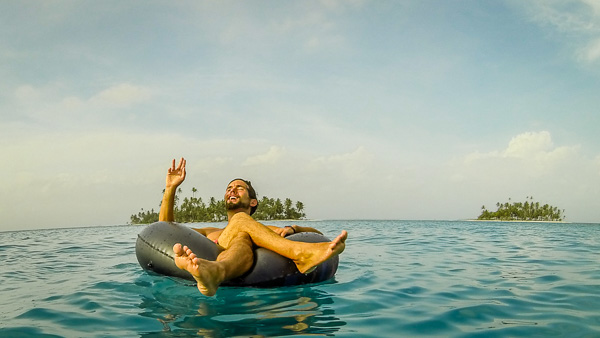 Rory loving life while floating around the islands 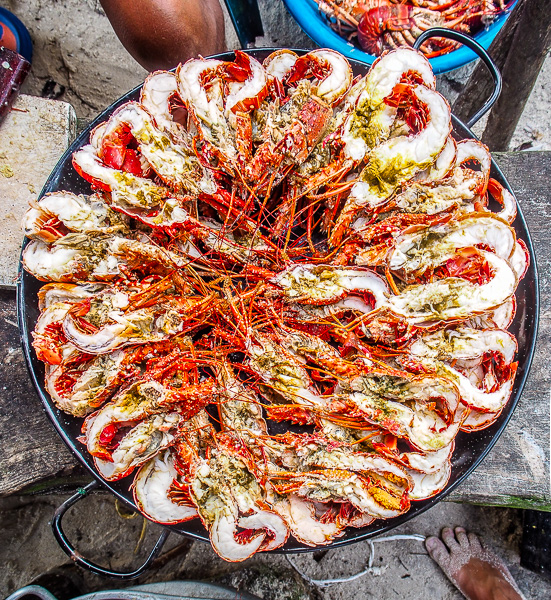 Anyone for lobster feast? 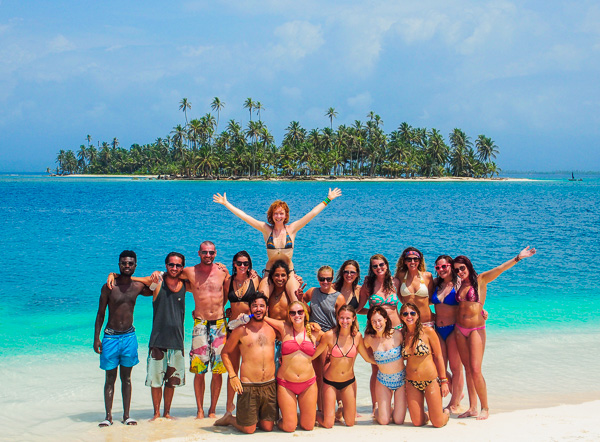 Group photo from one of Liam’s San Blas Adventure groups

I also volunteered for Cacique Cruiser and recommend their tours to people that want to start and end their San Blas trip in Panama City. The group dynamic is more diverse age-wise and the tour structure is different.

With Cacique Cruiser, you decide for yourself how many days you want to stay on the islands. You sleep on the same island and then do trips to nearby islands during the day. As people arrive and leave every day, you don’t get the same group feeling as with San Blas Adventures. Because of that, Cacique Cruiser is more fun if you’re not going alone. 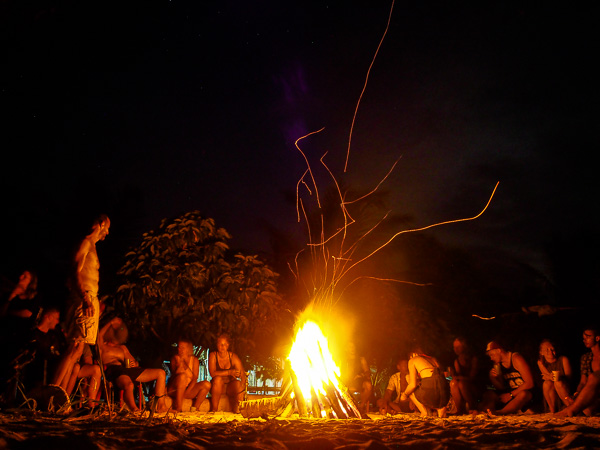 Bon fires and story telling on the San Blas islands 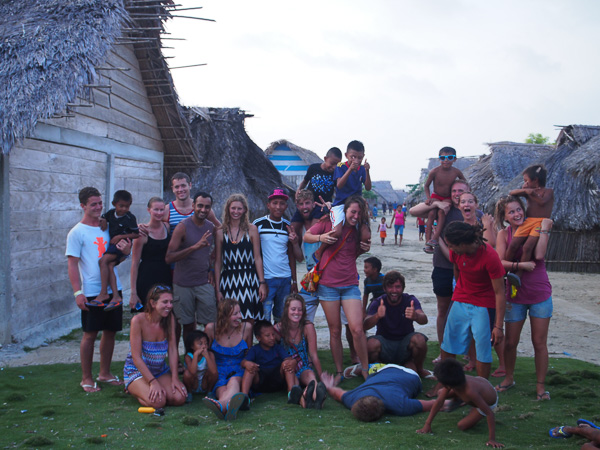 Both tour agencies and private captains organise sail boat trips either across the border or with return to the same country. Sailing time is naturally longer and if you’re crossing the border, you’re also facing a 36-hour op