During our two months in Morocco, we got to spend one whole week living with a young Moroccan family.

Until then, our knowledge of what happens within the confinement of a Moroccan home had been limited to guessing based on what we saw in the streets. Curious to understand this impression better, we headed off to live with a Moroccan family.

Our time with the family was a unique lesson in Moroccan family life.

Until then, the few times we’d set foot in a Moroccan home, we couldn’t help feeling a bit awkward or intrusive. Whenever women were present, they would cover up from neck to toe and some would even hold a scarf to their mouth as soon as they saw us. We could definitely sense that our presence was making them act different in their very own home.

In the family’s village, we got to understand this gender dynamic a little better.

Related post: How to backpack in Morocco as a female

There is a clear division between what men and women are expected to do.

The mother of the family would take care of the three C’s – cooking, cleaning and childcare -, while the father would go to work. After work, he would maybe have a tea at the local cafe before coming home for dinner and then spending the rest of the evening at a male friend’s house.

Most interaction in the house took place at dinner, when everybody would gather around. Except for a few hours in the morning when the oldest daughter went to preschool, the girls spent most of their days playing at home with their mother. 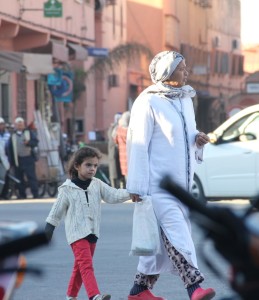 Typical sight in the streets of Morocco

This seems to be the way of life in traditional, rural families in general.

The only occasion we ever saw women working in the village, was when we visited the local argan oil cooperative where the girls’ grandmother works. Here, a handful of elderly women spend a few hours a day cracking open the argan nuts and grinding them into argan oil, which they then later use to produce cosmetic products to sell in the market. These cooperatives can be found throughout Morocco and constitute a way for women to help increase their families’ incomes. 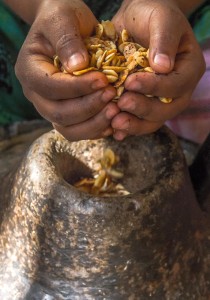 The hands behind argan oil creation

Where Are The Men At?

Pretty much everywhere else, it seems. When walking around the village, all you would see was men; men working in the shops, men sitting in the cafes, men selling goods in the market.

Moroccan men in the public space are everything the women are not; loud, pushy and, occasionally, with quite the attitude problem. You only need to loose your patience with one hassling seller to know that these guys are not the most flexible. Things are done a certain way and if you don’t agree, it might get a bit messy. 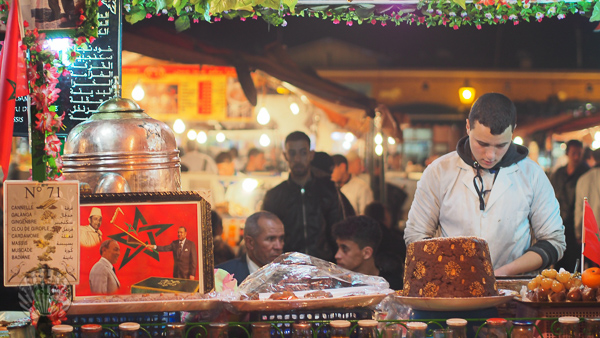 Moroccan men in the private space are maybe not that different.

To be fair, our only reference is the father of the family. We perceived him as a loving father and husband that loves his family more than anything. Whenever he was home, he’d play with the girls, make funny noises to make them laugh, and joke around with his wife.

Related post: How to stay dafe and sane in Morocco

Who Really Runs A Moroccan Family?

In any case, what we learned from our week living with a Moroccan family is that domestic life – at least in rural areas – is kept together by women. They’re the ones that spend the most time with the kids, cook the food and turn the house into a home.

The men might run the show in the streets, but without the women at home, they wouldn’t make it far 😉

What do you think? Don’t be afraid to leave us a comment 🙂