How To Find The Best & Cheapest Sahara Desert Tour

Previous Next
How To Find The Best & Cheapest Sahara Desert Tour

If there’s one thing you’ll get offered again and again in Morocco, it’s going on a desert tour in the Sahara. You can book them from pretty much everywhere, but beforehand it’s worth looking into prices, places and exactly which kind of tour you’re looking for. As usual, we wanted cheap, laid back and authentic. Since it took us a while to find that perfect cheap Sahara desert tour, we’ll share our experience to hopefully make it easier for likeminded backpackers. After all, you want that one time you go camping in the Sahara desert to be just as amazing as you pictured it. 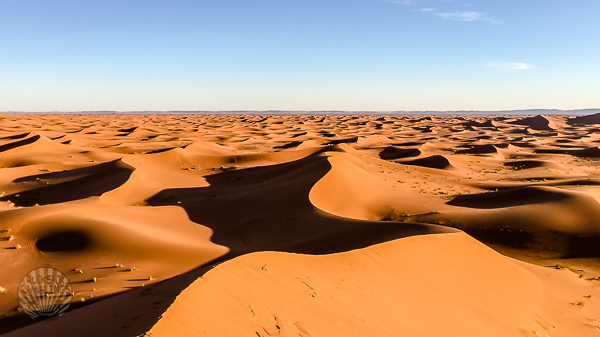 The dunes of the Sahara as far as the eye can see.

In our case, not only did we eventually find the perfect tour, we also got to meet some genuinely cool Moroccans on the way. Let the desert rambling begin!

Which Dune Should I Go To In The Morocco Sahara 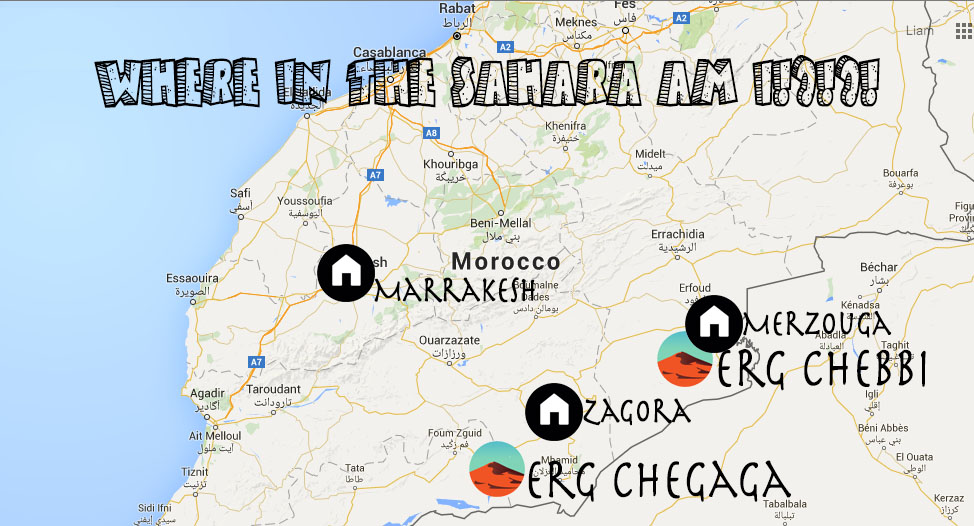 In Morocco, desert trips basically go to one of two different parts of the Sahara. The eastern part of the desert is accessed via the town of Merzouga, from where you visit the 150-m-high Erg Chebbi sand dunes.

In the southern part, the town of Zagora is used as a gateway to visit the up to 300-m-high Erg Chegaga dunes. A typical tour to either area includes one night’s accommodation and food, transportation to and from the dunes and – if you wish – a camel ride. Sounds pretty good, eh?

The Low Down of BAD Sahara Desert Tours

The thing is that regardless of whether you go to Merzouga or Zagora, doing a desert tour from Marrakesh entails 10 + hours of sitting in a car looking out the window. And that’s 10+ hours BOTH ways. Most tours do break up the drive and make stops at for instance Aït Ben Haddou on the way to Zagora, but the long drive is normally not something you’re warned about. The camel rides are usually just a quick 15-minute stroll. Accommodation is likely to be in one of the big, permanent camps that receive tour groups every day. They are made up by 10-12 tents and look more like desert villages with people everywhere than the peaceful experience you were probably hoping for.

Granted, accommodation and food in these camps are quite good; the tents are roomy and comfortable and probably look good in pictures as they are decorated with traditional rugs on the inside and whatnot. Food is plentiful and delicious, so you’ll get what you paid for in that sense.

The Best Part Of A Good Sahara Desert Tour

What you don’t get to do, and this is probably much more important, is admire an actual Sahara sunset in peace and quiet. You’ll be another sheep in the package deal machine. If you have no problem with this, well, now you know which desert tour to pick. Oh, and by the way, you should also be willing to pay a minimum of 900 dirham which is the price for a one night tour from Marrakesh.

Related post: How much to budget for backpacking in Morocco

All in all, these tours are not that appealing for backpackers on a tight budget who are looking for a cultural experience that’s even just remotely authentic.

How We Had The Best & Cheapest Sahara Desert Tour!

So, what to do if you still want your desert fix? One option is to do what we did. Once we realised that a considerable chunk of the expenditure on a desert tour was actually gas, it finally dawned on us: if we wanted to bring the price down, we’d have to start the tour closer to the desert.

Since we were already doing a Workaway stint in Tagounite which is about an hour further south from Zagora, first step was to find a Couchsurfing host in the area. This decision was based on two assumptions. First, we assumed that “if you live in the desert, you must know how to do a tour in the desert”. Second, we thought that “if you’re on Couchsurfing, your main interest must be to help travellers rather than to make money off them”. Of course you don’t need to go through Couchsurfing to find a cheap desert tour. The point is just that you don’t really need the tour agencies.

And this is how we ended up staying with Brahim in the sleepy oasis town of M’Hamid el Ghizlane. It’s located at the literal end of the road running south into the Sahara so your neighbour is likely to be a pile of sand. 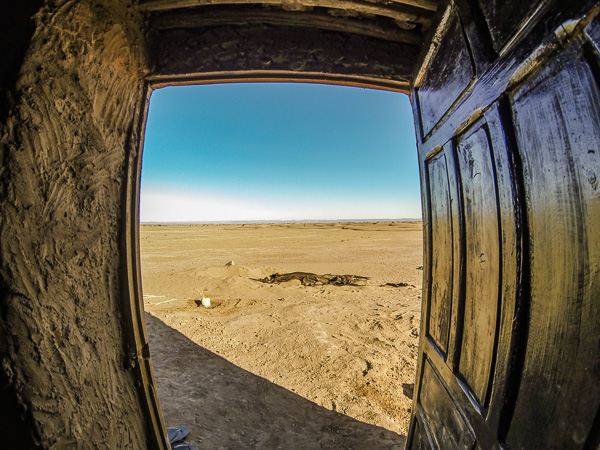 It’s our neighbour, the Sahara desert

Our Home Away From Home, Bivouac Leguioura

If you walk fifteen minutes down a dusty road leading out of M’Hamid, you’ll see a camel leg bone and, next to that, a sign saying “Bivouac Leguioura”. That’s the name of the small camp Brahim is building with the help of a couple of local guys and Michael aka Gabs, an Australia-loving volunteer from Arkansas. It’s a laid back project that grows whenever there are mud bricks and available hands. We never really got a clear answer on what the longterm plan is, which pretty much sums up the vibe.

You get up, have some breakfast, sit around for a bit, maybe make some mud bricks, sit around some more, have some dinner, listen to Brahim and the guys play some tunes, and eventually go to bed. And if you happen to get stuck at the sitting around part, that’s also okay. For us, it felt like a much-needed spa retreat with squat toilet and cold bucket showers. 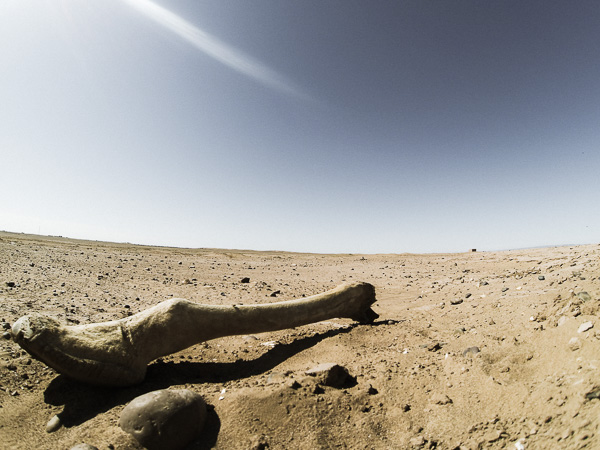 Found a camel leg on the side of the road

After dinner was when the magic happened. One by one, Brahim and the guys would find their instruments and jam away for a few hours. Berber music will never make it to our personal top ten of music genres, but the talent of these guys made listening to them an absolute delight. Especially Brahim’s younger brother Saha seems to be a distant relative of Jimi Hendrix as his guitar playing was simply mesmerising.

April 2017 update: excellent news! Brahim and the guys are now renting out their huts via Airbnb. If you’re interested in staying at their awesome place, just flick them a message via the Airbnb website directly!

Related post: How to safe and sane in Morocco

The In’s N’ Out’s of Our Saharan Desert Tour

After recharging our batteries for a couple of days, we started putting together a desert tour with Brahim. Due to its immediate proximity to the sand dunes, it was possible to bring the camels to the camp and ride off into the desert from there.

As mentioned, desert tours starting in the Zagora area normally go to the Erg Chegaga sand dunes. M’Hamid is actually only 50 km away from the dunes, but by camel it would take three days to go there and three days to go back, which was more than we wanted.

For Gabs and us two – so three guests – it would be 450 dirham each for one night’s accommodation, as much camel riding as we wanted, and lunch, dinner and breakfast. Having Saïd and Saha from the camp as our guides made it feel like we were just camping with friends.

At dusk, we set up camp some ten minutes before reaching one of the big, permanent desert camps. We actually only realised it was there when we went to see the sunset at the top of a tall sand dune nearby. Our tent didn’t have fancy rugs on the inside, but we slept in the middle of nowhere, under the stars, undisturbed and happy.

The best part of the entire tour was after dinner when we all laid down next to the crackling camp fire and talked about whatever came to mind. As you can imagine, light pollution was next to none, so the night sky was a breathtaking, pitch dark dome strewn with blinking stars in every direction. In that moment, we were happy we’d taken our time to put together our own camel tour in the desert ;)!

Down To The Numbers