And The 11 Best Things To Do In Town!

We had high hopes for Bratislava after seeing such good things in Eastern Europe so far. Sadly, we were let down. I mean, Euro Trip was a little off and we didn’t see any dogs running around holding human hands, but there just isn’t much to do here as an adventurous backpacker.

We tried very hard to find fun things away from the crowds and really struggled. The real fun in Slovakia is in the hiking and seeing the castles of the Tatra mountains, but we’ll save that for a seperate post soon. However, if you do end up coming to Bratislava to break up your trip between Poland and Hungary or for a day trip from Vienna, these were the best things we found to do.

Related post: What to do in Lviv with 48 hours

The Best Touristy Things To Do In Bratislava

Old town Bratislava is where it’s at for the package tourist. You’ll have to push your way through massive tour groups when you wander the winding cobble stoned streets. This is also where you’ll see almost all the must-see tourist spots, so there is no avoiding it! 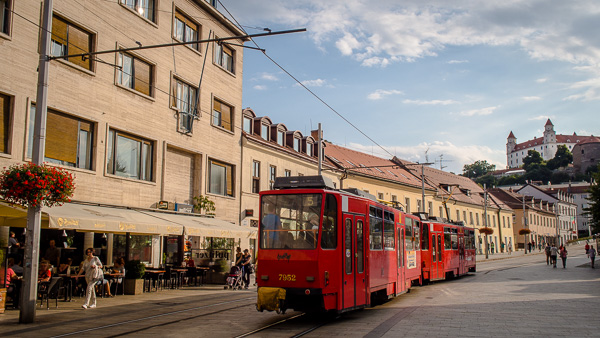 The edge of old town Bratislava

Hlavné Námestie or the main square is worth a look, but not because of the old town hall or the Roland Fountain. Instead, take a look at the plaque in front of town hall. It’s not really a plaque, but more of a white square that shows the level of a flood in 1815 made by an iceberg! That’s right, an iceberg. 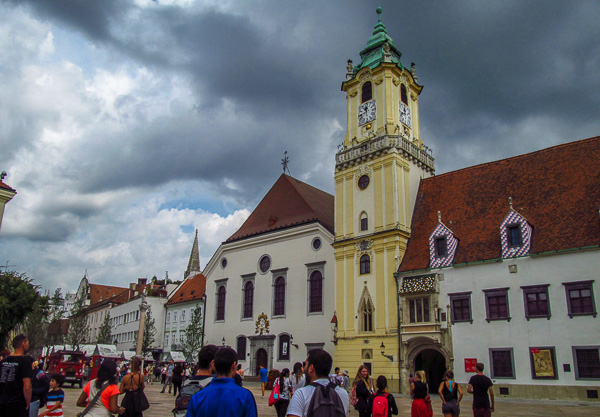 Michael’s Gate is the last surviving medieval gate from the original city fortifications. There is a good view of old town if you want to pay €5 for entry into the museum of arms. You can’t just go to the top, so if you don’t want to learn about old-school weapons I would save my money and go to one of the other free lookouts.

Related post: A backpackers guide to 48 hours in Riga 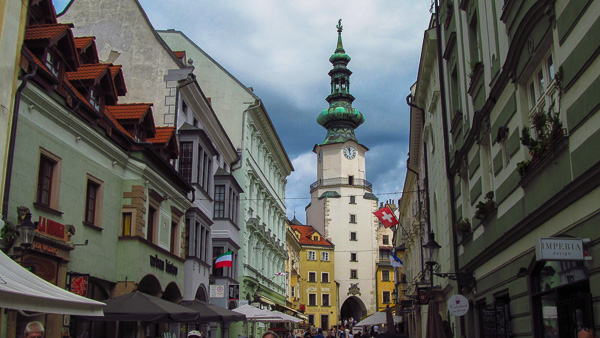 St. Martin’s Cathedral is the biggest and baddest church in old town. Pretty standard in church terms, except at the top of the spire there is a gold-plated pillow and crown the size of a VW car! Hats off to you if you’re able to climb to the top and pocket yourself a nice souvenir. 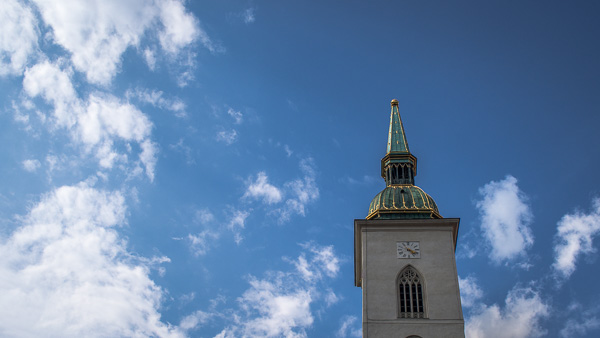 There is basically a gold-plated VW on top of that spire!

After you’ve seen if the Slovak National Theatre has anything cheap playing wander down the tree-lined Hviezdoslav Square to start statue spotting! I don’t know why, but Bratislava seems to have an unnaturally high number of strange statues dotted around its old town. There are at least 10 scattered around town with the man at work being my personal favourite.