10 Best Things To Do In Tehran

All the best things to do in Tehran put into one lovely list so you don’t need to do the hard work yourself. We even included tips on where to stay in Tehran at the end. Easy!

Iran’s capital Tehran has a bit of bad rep. Nasty words like boring, ugly, and soulless are often used to describe the city, and some even skip it altogether when backpacking in Iran.

But you know what? We don’t think it’s that bad at all. Tehran is not as picturesque as let’s say Shiraz, but it does have a certain intellectual charm to it. It’s where you find the most liberal people in Iran, and many women wear heels, make-up, and hijabs that barely cover their hair. The bazaars are bustling, the traffic is absolutely insane, and the locals are ridiculously friendly.

Best Things To Do In Tehran

If you’ve watched the Hollywood movie Argo, you know why the former American Embassy is a place to visit in Tehran.

If you haven’t, here’s the deal: on November 4, 1979, the US Embassy was seized by a mob of Iranian students. One thing led to another and bam, 90 people were taken hostage for 444 days inside the embassy. For Iran, the crisis had big consequences. Imam Khomeini became Supreme Leader shortly after and, well, the rest is history. International sanctions, the Iranian government retaliating by blocking Western websites, and all that. You know the story.

Further reading: How To Access The Internet In Iran

So why is visiting the embassy one of the best things to do in Tehran, 40 years after it was ransacked?

Because of the graffiti, my friend! Walk along the walls and you’ll see some wildly offensive, government-funded anti-America and anti-Israel graffiti. On a good day, the guard might even let you have a peek inside the embassy itself. But be warned: there are no official opening hours and photo permits are given according to star alignments. 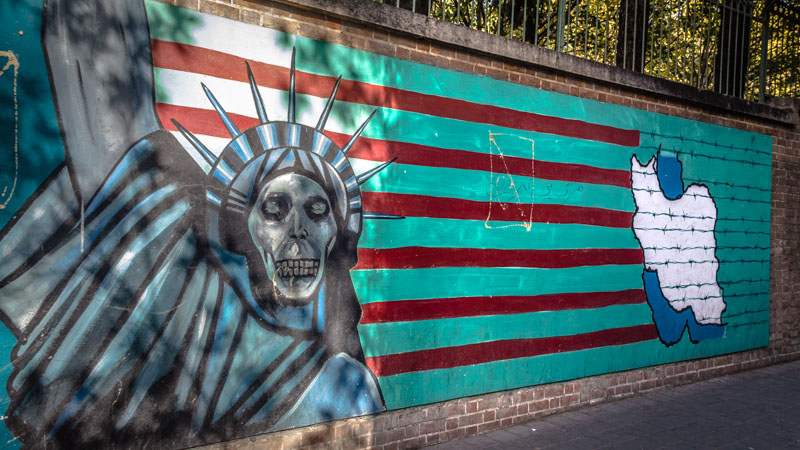 2. Get Lost In Tehran’s Grand Bazaar

Need something to lighten the mood after all this doom and gloom? Then we’ve got the perfect spot for you.

No matter which Iranian city you’re in, the local bazaar is where the real fun is at. For centuries, they’ve been the place where Iranians go to hang out, to shop, to drink tea, even to pray. From the second you set foot inside, you’re overwhelmed by exotic smells and the sound of hundreds of people chatting away.

Of all the Iranian bazaars we visited, the Grand Bazaar in Tehran was by far the most hectic and definitely one of the best things to do in Tehran. The sea of people spills into even the most remote alleyways, and you can find all sorts of exciting stalls. Sweets shops, Persian rug shops, spice shops, jewels with giant colourful rings, brass workshops, you name it. Just make sure you keep an eye out for the guys wheeling around the carts everywhere. They’re fast and it’ll take them about two seconds to turn you into a flat gringo pancake! 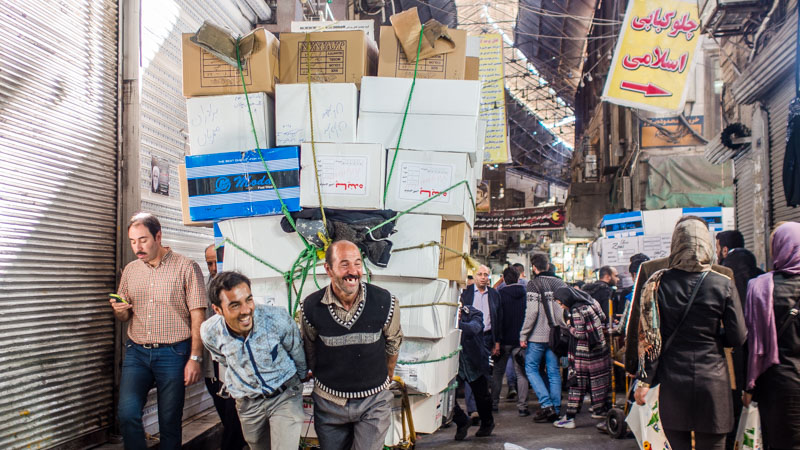 We’re not going to lie – we’re not that big on museums ourselves. But, if you do want a bit history with your Iran backpacking trip, we recommend these two Tehran museums:

One thing that will blow you away in Iran is how ridiculously friendly people are. At Moslem, you get to mix this world-famous hospitality with some finger-lickingly good food. That’s why we think it’s one of the best local things to do in Tehran.

Even before looking at the menu (which is in Farsi, so good luck with that), you’ll know Moslem is the place to eat. On a busy day, the line stretches for a good 100 meters down the street. And as the famous backpacker saying goes: if the locals are willing to line up, you’re in for some quality grub. 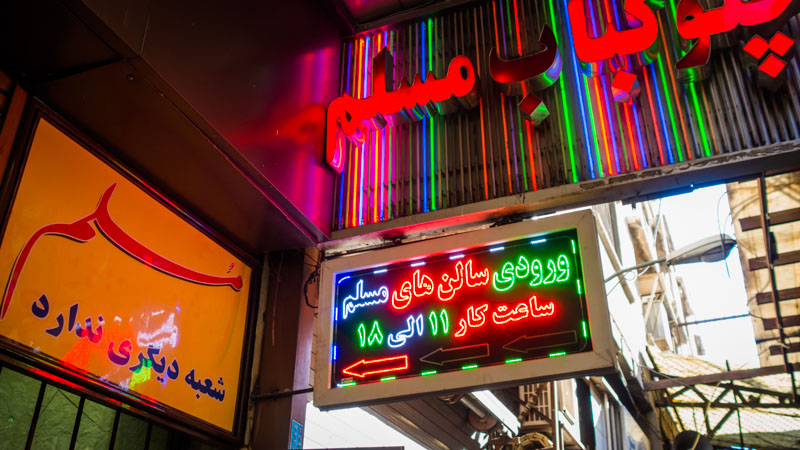 It’s located in an alleyway on the corner of the square between the Toton Forosh’ha Bazaar and the Zagartha Bazaar. Before lining up, you need to get a ticket and the menu from the guy holding a big sign. If your Farsi is a bit rusty there’s about 200 Iranians around you that will be more than happy to help a confused gringo out.

We were told to try dish no. 12, also known as zereshk polow with tah-dig. It turned out to be a traditional wedding dish consisting of barberry and saffron rice with chicken. Oh, and by the way: the servings are huge! We accidentally ordered enough food to feed a medium-sized family.

Further reading: 15 Iranian Foods That Will Blow Your Mind